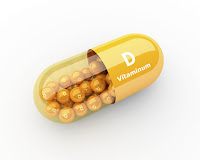 In a previous post from January 27, 2016  (http://blog1.smopinions.com/2016/01/7-interesting-facts-about-vitamin-d.html), it was mentioned that there are associations between vitamin D deficiency and certain types of cancer. This post will explain a little bit more about them.

Regarding colorectal cancer, it was noticed about 2 decades ago, that there is more mortality from colorectal cancer in the northern and northeastern parts of the United States, the ones which receive less sunlight. This in itself is not enough to establish a meaningful association, however, it gave a starting point for research. Then, 2 studies showed that having levels above 30 ng/dL in the blood may reduce the incidence of colorectal cancer by half1,2.

Finally, in regards to prostate cancer, it has been found that this cancer is also more common in regions with less sun exposure. In addition, lower vitamin D levels in the blood are related to more aggressive forms of prostate cancer. Last but not least, adequate levels of vitamin D may aid in the slowing of the progression of this type of cancer4.

More research is needed in order to confirm and strengthen these associations. In the mean time, it does not hurt to have adequate levels of vitamin D in the blood, particularly for people living north of the 30th parallel.